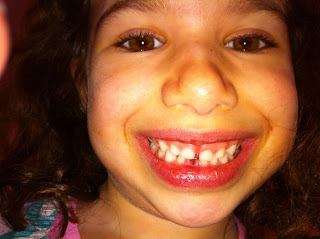 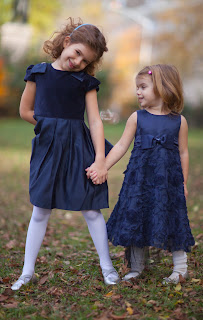 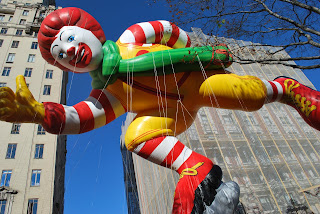 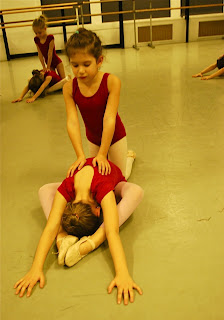 Is Tomorrow February? Yes! A lot is going on in 2012 but I just want to take a moment to recap the end of the year. Yes, I went to the Macy's Day Parade. I was up at 5:15 for the first time in my life. I even made a miniature float at a workshop at the Children's Museum, with designers of the real floats. What else?
I lost my first tooth at the Jet Blue terminal at JFK. I'm not sure where. Maybe at security when I took my shoes off and was x-rayed. The tooth fairy was super nice. Even though I lost my tooth at Jet Blue she left me five dollars and a really nice note.

I also met the half way point at Step's ballet. It was very strict and grown up. Martha makes us put our hair up in a tight bun.

Daddy: Looking back on 2011, the biggest even has to be surviving the Macy's Thanksgiving parade. We'd bought, or really, my wife, bought tickets at a school auction. I could have written a mean spirited letter to Bank Street for allowing school auctions, which are really akin to putting craps table in the front lobby. Yes, we won the auction, but now we had to wake up at 5:15, get our 3 and 6 year old to a cold bleacher at 6:15 AM, to wait for a 9 AM start time. I am reliving all of my fears right now, rather than the fact that I did it! I survived the parade, and despite a little crying, and a lost DSI pen, (I was one of the smart dads who brought activities to the parade!) I haven't written or thought about the parade in a while. I better take a moment to integrate, be grateful and get ready for 2012.

Oh, you can see a Christmas picture. My sister Julie held a photo shoot for the girls. The pictures came out great. Emma picked out the dresses.
Posted by Dermansky Inc. at 2:45 PM No comments: