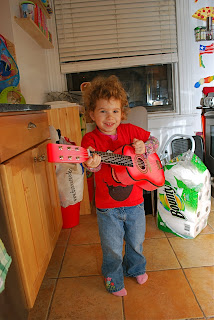 Man, did you ever feel like you were born to rock!
My hands strum the magic strings and words channel through me. I wrote a song entitled, Marly the Cat. 'Marly is ready to sleep and she wants a family dog!' the song goes.
We no longer have a cat, because they like to attack kids, when kids grab their tails, but they're fun to write songs about.

I bought this pink guitar from a Mexican man wandering around the upper west side. Emma had spoken about wanting a guitar and when a man with a giant box of guitars wandered past me, strumming a miniature guitar right in front of Zabaars, I took action.
"Ten dollars Poppi" he said.
Sold American!
Posted by Dermansky Inc. at 5:40 PM No comments: 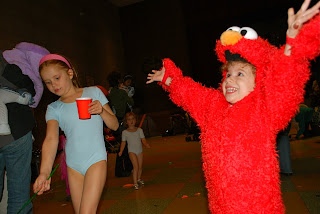 Putting on the fuzzy reds of Elmo makes me feel like I can lift 200 cookies with my bare hands, though I can't feel my hands, as they are covered completely with fuzz.

People seemed aghast that we would dress our child like Elmo. "Don't induldge these children," I was told by a grump guy in Starbucks.
"It's Halloween," I said.
"Not for six days," he said, picked up his latte and stormed out.
Posted by Dermansky Inc. at 2:43 PM 1 comment: 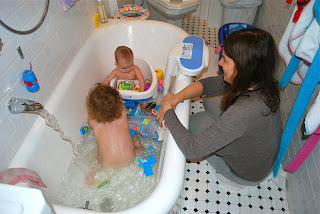 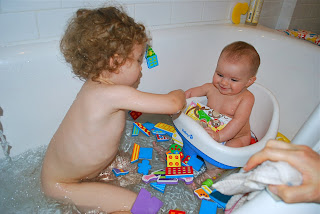 Maddy is in the tub! Her seat was used by the astronauts who went to the moon and were scared of floating away into the galaxy.
All of my toys fit into the seat like a shopping cart. We both got squeaky clean and I showed her how to draw and make mosaics. I got an A+ as a big sister.

It was a stroke of genius getting the baby seat for the tub. I am in fact a baby wrangler extraordinaire.
Posted by Dermansky Inc. at 5:22 PM No comments: 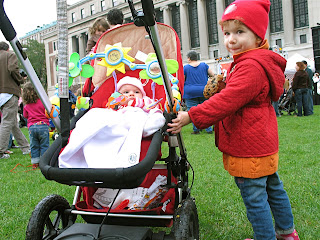 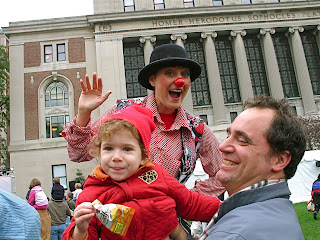 I made sticker bags, I ate a monster sized muffin, stood on daddy's shoulders, battled stilt people (people on stilts). Yes, there are no limitations at the Columbia book fair. Lisa Loeb showed up to talk about dating and tanning salons. Target had a book tent where I got 5 cools books. I support Target book day at Columbia.

I'm still in shock. Lisa Loeb sang an anthem about apples and bananas, broke down in tears and was carried off the stage by a giant Elmo. If I've learned anything, it's that children's entertainment is not easy. 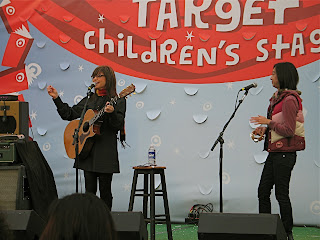 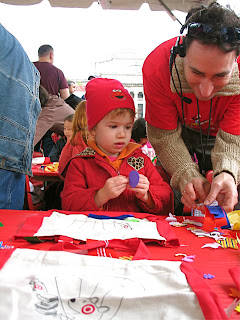 Posted by Dermansky Inc. at 7:49 PM No comments: 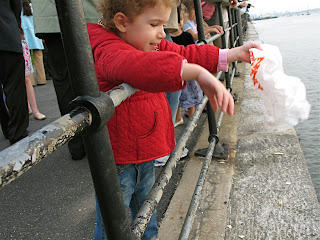 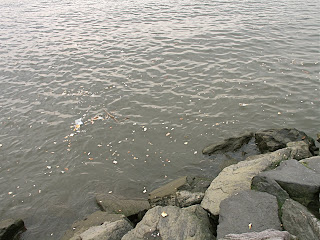 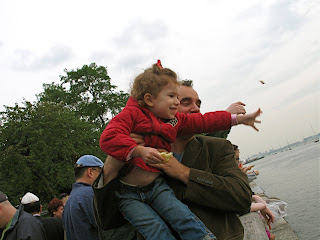 My parents said, "Emma, we're going to throw bread into the Hudson river. Do you want to go?"
Yes!
It's called Tash·likh, which is one of the many things you do for Rosh Hashanah, the Jewish New Year.
Then they said each bread crumb represented a sin from the past year we were symbolic-ally dumping into the bottom of the river. You can see all the bread in the river. Jews up and down the west side were clogging up the Hudson River.
Daddy took a giant piece of bread and through it like a discus all the way to New Jersey. I wonder what his sins are.

I really didn't do anything full of sin this year. No late night partying in the West Village. I'm sure there's something bad, bad, bad I did, so I threw a giant piece of stale Challah all the way to New Jersey, to cover all bets.
Posted by Dermansky Inc. at 3:45 PM 1 comment: